Why We Took a Stand on Non-GMO

Looking Back: Celebrating Our 20th Anniversary! 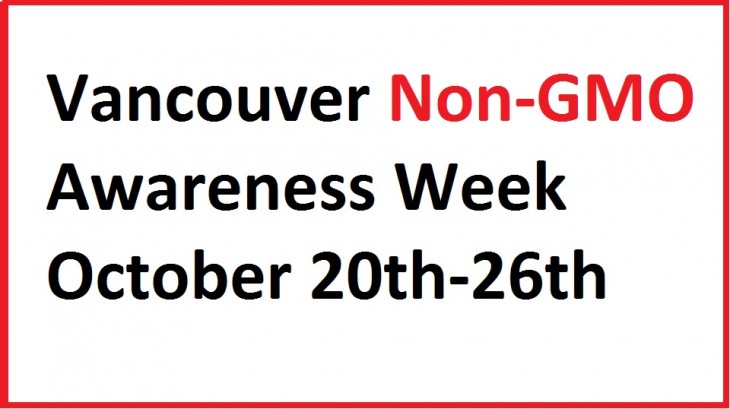 BURNABY, B.C., Oct. 17 /CSRwire/ – Mayor Gregor Robertson will proclaim October 20th-26th Non-GMO Awareness Week in the city of Vancouver, following a request by the Vancouver Food Policy Council (VFPC). The VFPC is the volunteer advisory committee that helps the city move toward a more just and sustainable food system.

Inspired by a month-long campaign in the U.S. by the non-profit organization The Non-GMO Project, Mayor Robertson’s proclamation will help local community groups raise awareness and generate discussion about the complex issues behind Genetically Modified Organisms (GMOs) in our food supply. News of the proclamation has inspired the creation of several events by the local community group GE Free BC, including a celebration dinner, a press conference with a reading of the proclamation by Councillor Andrea Reimer and a Facebook party.

Zsuzsi Fodor, co-chair of the Vancouver Food Policy Council, says the city has a role to play in this issue.

“Genetically engineered foods, or GMOs, present risks to our food system,” says Fodor. “While much of the regulatory work that needs to be done falls under the jurisdiction of the federal or provincial government, municipal governments can do their part by helping educate citizens about the risks of GMO crops and the pesticides associated with them.”

“At Whole Foods Market, we believe consumers have a fundamental right to know what’s in their food so that they can make informed choices about what’s right for them and their families. Our shoppers are telling us they want to know when food is genetically engineered. We hope that as we provide that transparency, others in the industry will follow our lead.”

Ian Walker, President of Left Coast Naturals, a local supplier to Whole Foods Market, will also participate in the press conference. In January of this year, Left Coast Naturals announced its own non-GMO policy, promising to rid its catalogue of GMOs by the end of 2015. The move will make Left Coast the first food distributor in North America to create such a policy.

“Consumers are nervous about GMOs, and rightly so, but many are not sure why,” says Walker. “In the absence of a ban on GMO crops, we think that educating consumers and providing them with choice are practical steps.”

Founded in 1996, Left Coast Naturals is an organic and natural food manufacturer and distributor based in Burnaby, British Columbia. Distributing nearly 30 brands, 200 bulk foods, and two house brands—Hippie Foods and Left Coast Bulk Foods—to grocery, specialty and natural food stores across Canada, Left Coast Naturals is committed to serving the planet, the community, and customers. It is a certified B Corp, the first distributor in North America to have a non-GMO policy and was recently selected as one of Canada’s Top 100 Small & Medium Employers. The company celebrates natural foods and only uses pure, simple, whole-food ingredients. For more information, please visit leftcoastnaturals.com; Twitter @LeftCoastFoods; and Facebook facebook/leftcoastnaturals.

About Whole Foods Market®
Founded in 1980 in Austin, Texas, Whole Foods Market (wholefoodsmarket.com), is the leading natural and organic food retailer. As America’s first national certified organic grocer, Whole Foods Market was named “America’s Healthiest Grocery Store” by Health magazine. The company’s motto, “Whole Foods, Whole People, Whole Planet”™ captures its mission to ensure customer satisfaction and health, Team Member excellence and happiness, enhanced shareholder value, community support and environmental improvement. Thanks to the company’s more than 78,000 Team Members, Whole Foods Market has been ranked as one of the “100 Best Companies to Work For” in America by FORTUNE magazine for 15 consecutive years. In fiscal year 2013, the company had sales of $12.9 billion and currently has more than 360 stores in the United States, Canada and the United Kingdom.