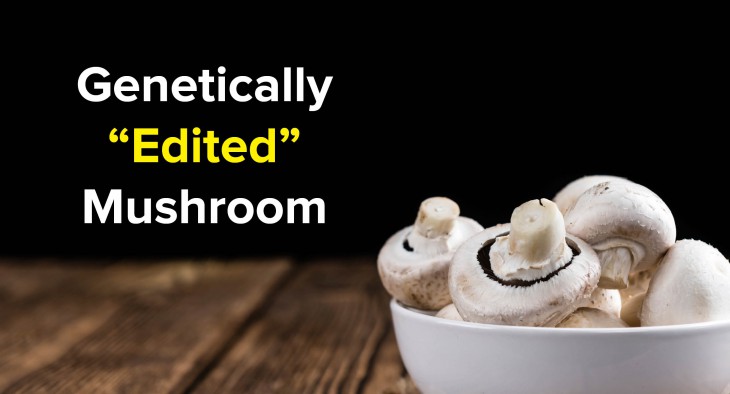 What’s the fuss about a lil ol’ white button mushroom?

This one doesn’t brown. But unlike the non-browning Arctic Apple and common definition of a genetically modified organism, no foreign genetic material was introduced. Using the CRISPR Cas-9 gene editing tool,  Penn State researcher Yinong Yang deleted DNA for the enzyme polyphenol oxidase which causes browning to occur.

The USDA (United States Department of Agriculture) has decided that the mushroom does not have to undergo the same biotech regulations as GMOs as the modification was considered too small for it to be categorized as a GMO.

Grist’s Nathanael Johnson says such small mutations routinely happen in nature and that with new technologies like these, “we might be poised for a flood of new crops built to resist disease, insects, drought, and — like this mushroom — spoilage.” He proposes that we, “stop fighting over the nebulous category that we call GMO, and start discussing how these new technologies might change the world.”

However, Douglas Gurian-Sherman from the Center for Food Safety shared with NPR that “the lack of formal regulatory review of gene-edited crops is disturbing.” And that, “gene editing techniques such as CRISPR, he says, can create genetic alterations that are not fully predictable. ‘Because of the newness of the technology, we think that it should be regulated as a technology,’ and all crops created by gene editing tools like CRISPR should require government approval.”

NPR reports that the current regulatory framework for genetically modified crops in the US is being reviewed and will include how to regulate new biotechnologies. These decisions ultimately affect our global food system. Should genetically “edited” foods be regulated? What does this mean for food labelling? What other considerations need to be included in the conversation? Share your thoughts.