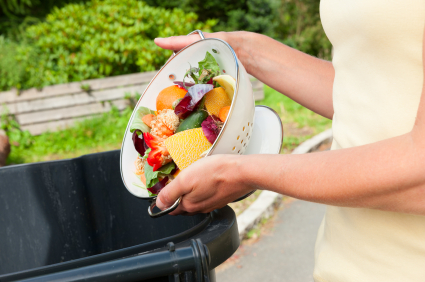 Photo from CNC Health: “Are you Throwing Away Good Food Just Because It’s Expired?”

O Food. How do I love thee? Let me count the ways.

The buttery flake of a freshly baked pastry. The sweet nectar of a sun-ripened mango. The intoxicating aroma of sizzling bacon covered in…more bacon. But in our love affair with food why do we seem to be failing so miserably at showing our appreciation for it?

According to the UN’s Food and Agricultural Organization, each year we dump over 1.3 billion tonnes of edible food, costing the global economy 750 billion dollars. Not to mention our food waste’s astounding carbon footprint of 3.3 billion tonnes of greenhouse gases that are released into our atmosphere and contributing to global warming. If food waste were a country it’d be the third greatest greenhouse emitter in the world.

So why are we putting food into the trash instead of onto our plates? Especially when 805 million people go to bed hungry every night and we are expected to feed over 9 billion mouths by 2050 as populations continue to grow. It depends on where you live. Wealthier regions waste more food at the consumption level while poorer regions lose more food at the production, storage and distribution levels as they tend to have less access to dependable systems and technology to store and get food to market before it spoils.

Table from NRDC Issue Paper: “Wasted: How America is Losing Up to 40 Percent of Its Food from Farm to Fork to Landfill.” 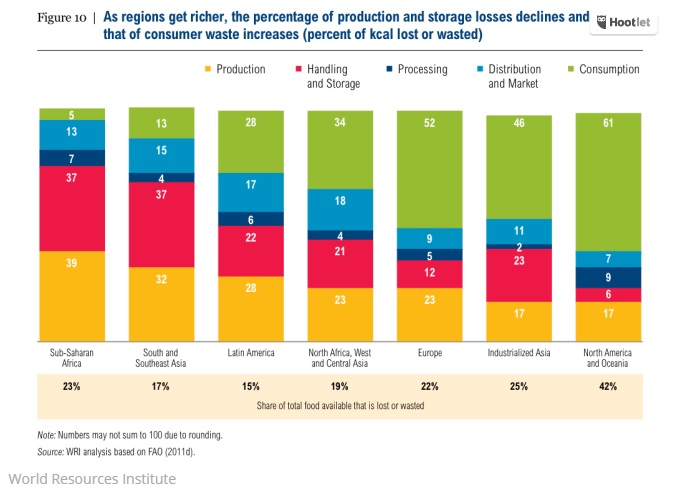 Whereas in wealthier regions, according to Grist and the National Resource Defense Council, food waste is a matter of culture. We throw away perfectly good produce because it doesn’t meet our aesthetic standards, we don’t understand sell by dates, restaurants serve food that never gets eaten, and continually changing market prices and consumer demand can leave good crops not harvested – about a third of the food from the farm never actually makes it to the fork. 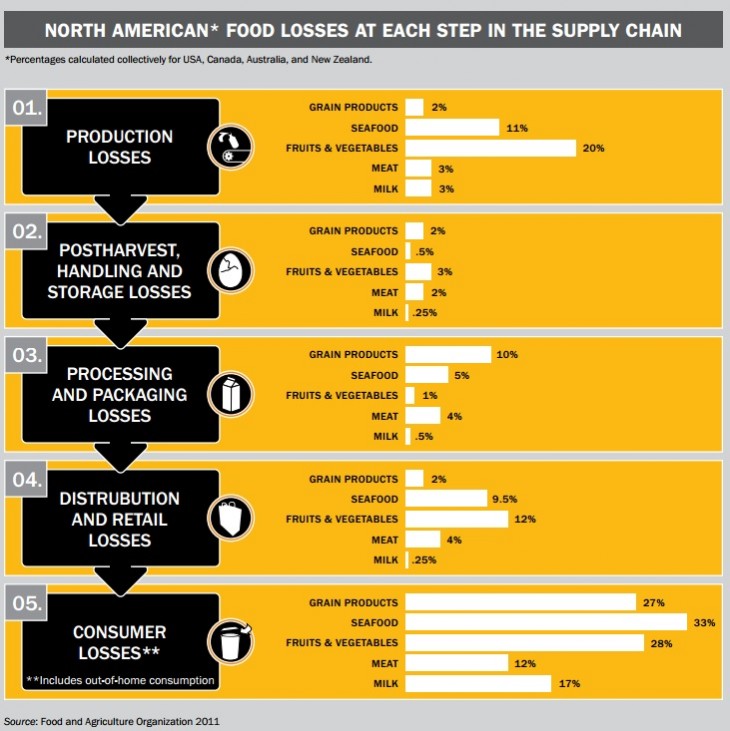 But what can be done about this behemoth of an issue that needs to be addressed by policy and every step of the supply chain? For starters, since the majority of food waste is at the consumer level in North America we can take a look at our own food habits. Farm Folk City Folk has excellent information and resources like their Best Before Chart that helps you save money and food by showing how long food actually keeps before you need to dispose of it.

And you’re not the only one who’ll be showing some love for food. Among others, anti-food-waste initiatives gaining momentum are France’s Intermarche supermarkets that make “ugly” fruits and vegetables sexy to change our misconceptions about imperfect produce; Italy’s Last Minute Market which reclaims food from farmers, processors and stores to donate to different communities; or Canada’s Harvest Power which turns food waste into energy and compost.

There’s a lot to learn and much to do. But there’s no time like the present to start and spread the word.